There are two strategies about geometric correction on satellite data in order to performed a good resampling.

At first stage the pixels are located whether on the basis of parameters or on used model to represent earth’s surface, for the second actually the pixels concerning the scenario are corrected (Fig 1 e Fig.2).

The most used correction is tow stages one because corrected data will be already provided to user by system, in a second phase the user may resample data,mainly re-defining the correction.

The principal steps they compose a right process of resampling basically include:

Once geometric correction performed, that is identified a new empty corrected gereferenced matrix, let’s allocate a value to all cells. It is hard determinate what is the value to transfer because the new pixel’s center often doesn’t match with pixel one corresponding to original image.

The resampling techniques are able to associate pixel radiance’s input values to the final cells in right output image  (Fig 3).

DN(x,y) radiance value, associated to output pixel, is the number corresponding to the pixel in row-column (r,c) coordinates closer to (x,y) coordinates obtained by transformation. This technique is important to gereference soil maps, actually it doesn’t allow to covert orignal pixel’s values (Fig.4). 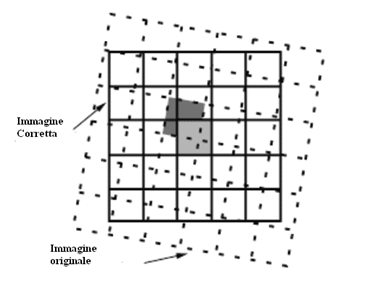 The four close pixels to coordinates(x,y) obtained by geometric transformation are involved in such a interpolation, which is able to define a new radance value. Input radiance’s values are being modified by creating an image having less pronounced contrasts with progressive steps. 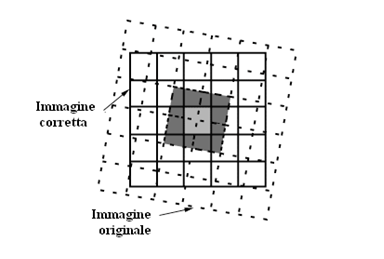 The degree of this operation is larger than previous ones because closest sixteen pixels are involved.Such technique modifies the radiometric value a lot, therefore even if the final result  could have a pleasant visual effect, it is not recommended to use output image for radiometric analysis.(Fig.6). 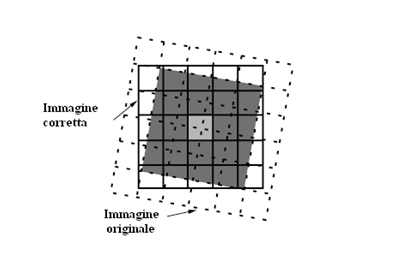 In the end, where the characteristics of geographic registration aren’t compulsory, it isn’t  recommended to immediately coregister the image because of the modification of radiance values modified by bilinear and bicubic interpolations.